The Potential Effects of Soy on Fertility

The Potential Effects of Soy on Fertility

The Potential Effects of Soy, and How it Might Decimate the Health of Your Unborn Baby and the Fertility of Future Generations
Mercola.com, July 29 2012

If you’re pregnant or thinking of having a baby, you might want to take a look at some new research on the effects of plant estrogens, such as that found in soy, on a developing fetus.

According to Medical News Today1, a paper published in Biology of Reproduction2 suggests that exposure to estrogenic chemicals in the womb or during childhood has the potential to negatively affect a woman’s fertility as an adult.

This coincides with earlier research on neonatal effects of exposure to plant or environmental estrogens. In studies with mice, researchers found that causes of infertility included:

Reduced ability of the oviduct to support embryo development before ovulation, and
Failure of the uterus to support effective implantation of blastocyst-stage embryos
According to Medical News Today:

Together, those changes led to harmfully altered immune responses and to compromised oviduct support for preimplantation embryo development, both of which would likely contribute to infertility.”

Since human development of the reproductive tract continues through puberty, researchers believe that estrogenic chemical exposure to human females as a fetus, infant, child, and adolescent could have impacts on fertility. The authors suggested that minimizing the use of soy-based baby formula would be a step toward maintaining female reproductive health.

Earlier research has also found that the compound genistein impairs sperm as they swim toward the egg. Even tiny doses of the compound in the female tract could destroy sperm, which would impair your ability to conceive in the first place.

Do You Still Believe Soy is a Health Food?

Soybeans contain compounds called phytoestrogens or isoflavones, which have been found to produce a variety of mild hormonal actions within the human body by mimicking the sex hormone estrogen. An increased risk of breast cancer is another potential hazard, especially if you’re exposed to high amounts of estrogen-mimicking compounds from birth.

Making matters worse, unless you’re buying USDA 100% Organic soy products, chances are you’re consuming genetically engineered (GE) soy, or feeding it to your baby, and GE crops—soy in particular—has also been linked to serious fertility problems. Glyphosate, the active ingredient in Roundup, has similarly been implicated in causing miscarriages, and both conventional- and genetically engineered soy is typically treated with heavy doses of this herbicide.

All in all, the health hazards of unfermented soy products—particularly genetically engineered varieties—are so serious and numerous, I strongly suggest avoiding them altogether, whether you’re planning a pregnancy or not. But clearly, it’s of particular concern for pregnant women.

For an excellent summary of the many dangers of consuming unfermented soy, please see this previous article by The Weston A. Price Foundation.

Unfortunately, many Americans who are committed to healthy lifestyles have been hoodwinked and manipulated into believing that unfermented and processed soy products like soy milk, soy cheese, soy burgers and soy ice cream are good for them. This is a tragic case of shrewd marketing and outright lies, with the end result of producing large profits for the soy industry and impaired health for most who have been deceived into using unfermented soy long-term.

Why You Should Avoid Feeding Your Baby Soy Infant Formula

Nearly 20 percent of U.S. infants are now fed soy formula, but as demonstrated in the featured study, the estrogens in soy can cause serious long-term harm to your baby’s sexual development and reproductive health. It’s important to realize that feeding your baby soy formula is like giving her an estimated four to five birth control pills’ worth of estrogen every day. Infants fed soy formula have up to 20,000 times the amount of estrogen in circulation as those fed other formulas!

A 1997 study in The Lancet3 found that infants who consume soy formulas were exposed to phytoestrogen levels that were 6-11 times higher, on a body weight basis, than in adults consuming soy foods. And when you consider the fact that drinking two glasses of soy milk a day for one month provides enough of these compounds to alter your menstrual cycle, I’m sure you can see what a massive problem soy formula can be.

Male infants are also adversely affected by phytoestrogens. Male babies undergo a testosterone surge during the first few months of life, when testosterone levels may be as high as those of an adult male.

During this period, baby boys are programmed to express male characteristics after puberty, not only in the development of their sexual organs and other masculinity traits, but also in setting patterns in the brain characteristic of male behavior. Flooding his system with female hormones during this time can have severe ramifications on his development, including potentially smaller testes and significantly reduced testosterone levels.

Today, about 15 percent of white girls and as much as 50 percent of African-Americans girls show signs of puberty, such as breast development and pubic hair, before the age of eight. Some girls are showing sexual development before the age of three! Such premature development of girls has been linked to the use of soy formula and exposure to other environmental estrogen-mimickers such as PCBs and DDE.

Aside from harmful endocrine disrupters, soy infant formula can also contain over 1,000 percent more aluminum than conventional milk-based formulas. Aluminum is a potent neurotoxin that has been implicated in the development of Alzheimer’s disease and other brain disorders. According to a study in Pediatrics, the official journal of the American Academy of Pediatrics4:

“Aluminum is now being implicated as interfering with a variety of cellular and metabolic processes in the nervous system and in other tissues.”

But that’s not all. Many soy foods also have toxic levels of manganese. Soy formula contains up to 80 times more manganese than is found in human breast milk, and according to recent research, high concentrations of manganese can lead to brain damage in infants and altered behaviors in adolescents.5

I rarely talk about absolutes but this is one instant where I will say: I encourage you to NEVER give your child soy formula. (I guess the only exception would be if there was a catastrophe and soy formula was the only food source temporarily available to keep your baby alive.)

The Benefits of Breast Feeding, and Healthier Alternatives

One of the best gifts you can give your child is to start out their life with a sound nutritional foundation, and the best way from a health perspective to do this is by breastfeeding if you can. In fact, statistics show a clear correlation between feeding infants artificial formula and increased infant mortality within the first year.

It’s important to realize that there are at least 400 nutrients in breast milk that are NOT found in formula. Of course, the healthier a mom’s diet is, the healthier her breast milk will be, too. While any amount of breastfeeding is better than none at all, it is clearly to your advantage, and best for your baby’s health, to breastfeed exclusively for at least the first 6 months. Then, at the age of 6 or 9 months, you can begin to supplement with solid foods (while still continuing to breastfeed as well).

As you can see from the chart below, breast milk, and animal milk are far superior to commercially available infant formulas. What exactly does your baby stand to gain by being breastfed? 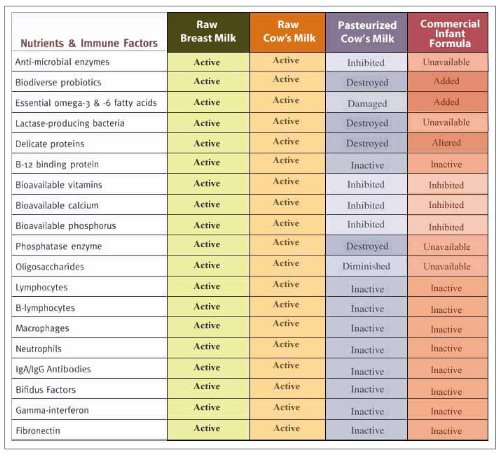 There are benefits to mom, too. The main ones are a reduced risk of chronic diseases like cancer, a faster return to your pre-pregnancy weight, and increased bonding between you and your baby.

There are circumstances and medical conditions that can prevent a woman from breastfeeding, however the majority of women are able to breastfeed successfully. If you need help, contact a lactation consultant in your area for tips and support. You can also visit La Leche League, which is a phenomenal resource for breastfeeding moms. If for some reason you’re not able to breastfeed, or you have adopted a baby, your next best option is to make a healthy infant formula using raw milk.